I've been using some of the incredibly useful scripts & buttons. I've looked over the site and haven't found the answer (without learning the whole scripting thing which hasn't worked out).

Having sorted out the poor levels in the audio, I would like to return the modified date to coincide with the file name also in bulk. Could someone help out with this (or point me to the solution if I missed it)?

Do you want to change the file's modified date to match the one in the filename?

Or do you want to update the date in the filename to match the file's current modified date? (Wouldn't re-using AlbatorV's button do that?)

Hi, thanks for the reply. I have used AlbatorV's to modify the filenames. What I need to do now, having normalized the levels is return the modified dates to the original date & time. Regrettably the program which creates the files opens an mp3 then sits there with the file open until triggered by an audio event which it then records. As a result, the created date & time are mostly inconsistent with the actual time of the event, but the modified date & time is correct; well, minus the length of the clip!). Thus I am looking to take the file name and turn this back into the files modified date & time.

Here's a button which will do it:

This uses proper scripting instead of kludging things through a rename script:

Script inside the button, for reference:

It uses a regular expression to extract the date & time from the file, so that can be changed to make it work with other filename formats.

(Here is a short video showing the steps above: nudel.dopus.com/posts/dcf_drop.wmv )

You can now select some files, click the button to set their timestamps (skipping any files whose names aren't in the expected format).

It doesn't recurse into directories, but you can make it do that if you want (just add the RECURSE argument to the Rename command at the top of the button).

Well, thank you very much, Sir! Do you ever stop working?? Whether you do or don't, one thing's for sure, I don't know how the hell I coped without DO all those years LOL.

Cheers, you're a star.

So... I'm back for my bi-annual nuisance visit!

Is there a way to have the rename script take a filename (YYYY-MM-DD_HHMMSS.mp3) and adjust the 'modified date' to the [file name] + [mp3 duration] ?

The example in question would be file(s) which have been 'date-named' and converted to a new format (e.g. WMA > mp3) thus losing their original modified date and time, which of course differs from the created ones.

I would like to use this button with the inverse operation, i.e. first store the date_time into the file name, but I can't find the inverse function of SetAttr.

The SetAttr command is for changing dates and attributes.

The Rename command is what you need if you want to change the filename. You can use the enable file information fields checkbox in the rename dialog (or FILEINFO argument if you're making a button to automate things) which then gives you a drop-down to insert codes, including ones for the file's dates and times.

With thanks to MrC, who has really done a great job in creating a script which may do most (if not all) what you need, you may wish to have a look at
thread: Change modified date after filename

I admit, it is a bit of a tailor-made script and you need to test it first.

I have created a "Date from filename"-button to do the redates. 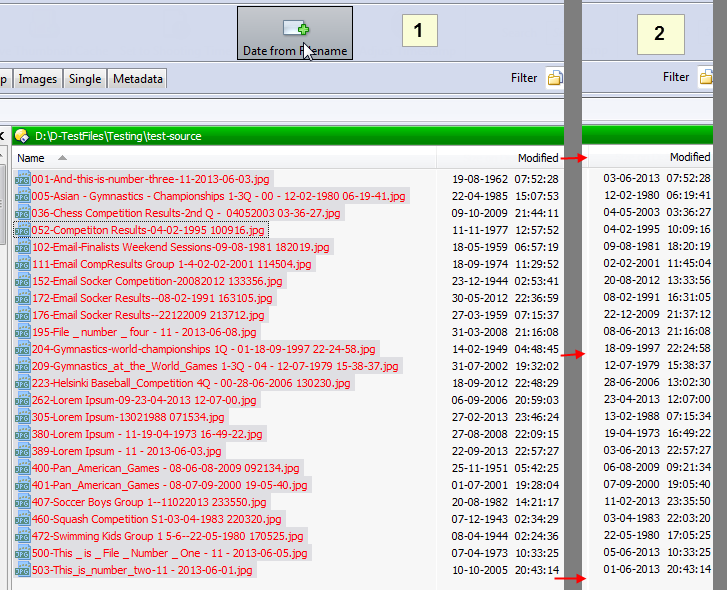 I have just tried your 2017 / Dopus 12 script and works fine with the filename format "YYYY-MM-DD_HH-MM-SS". I have even made a minor edit for changing the Creation Date attribute, instead of the Modified Date.

How this script can be modified for extracting the date from a format of "YYYYMMDD_" from either the filename OR from the folder-name? (two different scripts, on two buttons, are fine!)

OR from the folder-name? (two different scripts, on two buttons, are fine!)

This looks at the parent folder name instead of the file name:

(Change MODIFIED to CREATED as well if you want to set that timestamp instead.)

Thank you very much dear Leo!

I just ran into the same issue. Since this topic is like 10 years old, do we have now some new moments? as Opus command set has significantly raised in power since...

I need to set the modified date from the first part of the filenames like this:

My locale date format is "dd.MM.yyyy" - I'm not sure how it would interfere with all that business?

Since this topic is like 10 years old, do we have now some new moments?

The topic is old but the solution in the 4th post was "Updated for 2017 / Directory Opus 12" and is still current.

I need to set the modified date from the first part of the filenames like this:

You'd need to adjust the regex search and replace strings. Probably something like these:

Try it on some test files first, of course.

Is it time to split the thread? Into one about renaming and a second one about attribute setting?

This could be a good idea. I kinda got lost over there.

Apart from 3 short posts in the middle, the whole thread is about setting timestamps from filenames, including the start of the thread and the new posts this week.

(There was a Rename command in the original, old solution, because that was a way to run scripts in the past, before there was more widespread scripting support. It wasn't really renaming anything though, and the newer solution doesn't need that method.)