However, it doesn´t return any results, even though it should. Therefore i used the find panel, which works ok so far, giving me an opportunity to filter from a range
(like >=3 stars), but it´s very slow, if i run it against several hundreds of image folders. So, here´s my question: why doesn´t work the find QUERY thing for me, & how
could i declare a range like 3-5 stars in it? I suppose, the find QUERY search might be a lot faster than the find panels search, if it´s based on Windows´ indexed search.
I already narrowed down the search corridor to the location, where the images in question are located (in the panel´s search), but it would still take clearly longer
than estimated 10-15 minutes to run a full search on my photo collection, which is a bit slow.

Find QUERY rating:“4 stars” is the right command, but it’ll only work with ratings that Windows Search can understand, since that command runs the query through Windows Search. It works on MP3 files. It probably doesn’t work on XLS files. You can us…

Ok, so the stars rating for JPGs isn´t one of those file types. I will stick to the find panel instead. Thanks.

It works fine with JPG files: 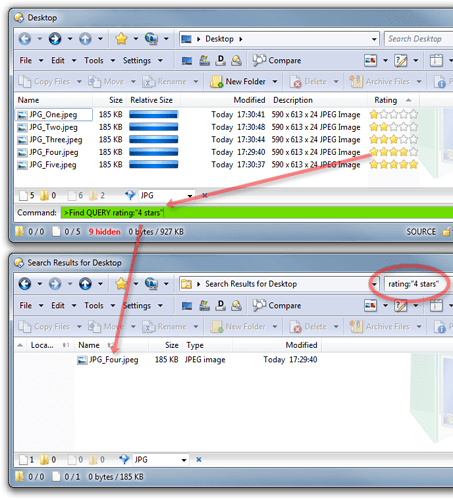 For some strange reason it doesn´t work here, neither from the F3 search field, nor from the command line.
Of course i have all my files indexed with properties & all. I´m using JPG files here, instead of JPEG, but
i suppose, it shouldn´t make any difference.

Maybe it´s broken in the german version, somehow? To clarify, i describe the exact steps of how i´m trying:

Does Explorer's Rating column show 5 stars for those files? (Does Opus's?

What happens if you put rating:"5 stars" into Explorer's search field?

What happens if you put *.jpg into Opus's search field?

Does Explorer's Rating column show 5 stars for those files? (Does Opus's?

Yes, it does, in both Opus & Explorer.

What happens if you put rating:"5 stars" into Explorer's search field?

It doesn´t return any hits.

What happens if you put *.jpg into Opus's search field?

Well, that seems to work normal, returning all images from the base folder plus those from the
subfolders.

Here´s how i add the ratings: >SETATTR META rating:1, etc.
Maybe the code is obsolete? It´ll show the stars, though.

I guess the Windows Search does need to use different words under German Windows.

Ah, yes, Microsoft did just that and apparently documented it even worse than the English syntax. That thread links to some docs on the German syntax but they're incomplete. I had trouble finding better, but maybe you'll have more luck with a German search engine/forums.

What a pain. This means all the query strings we come up with on the forum will only work in English.

. I will try to find out more later. In the meantime, i still can use the extended find in Opus.
(& yes, informations about that seem to be very thin in the internet )

This seems to work in my german Version

Oh, indeed, thanks! I already tested with the german term, but i couldn´t figure out to use "", which seems also
a bit weird to me (because it´s a whole different paradigm, or what it´s called. I would have expected "5 Sterne" or something like that).
Anyway, i also can search for ranges, using [b]Bewertung:"*" OR "" OR ""[/b].

If you happen to have the whole list, i´d be interested. I couldn´t find a clue about the german terms even in a half an hour of research.
They must have it well hidden..

[quote]If you happen to have the whole list, i´d be interested.[/quote]I don't think there's a list. It was just creative try & error that I found this.

Would be interesting to know if "rating:*****" also works in the english version.

Yep that works in English.

You can also do this to check for ranges:

So in German this should work:

This is also working in german (only without quotes):

bewertung:5 sterneWhen you type "Bewertung:" in Explorer you'll get a popup to select: 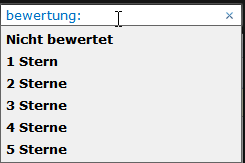 Interesting. Thank you both. I think i´m going to set up some drop down menu for the typical search cases.