I have got following error after enabling content type and displaying format as per different content type.

I also had created a new File Type Group for eBooks which contained .pdf, .epub and .azw.

Any idea on how to find what caused this error. 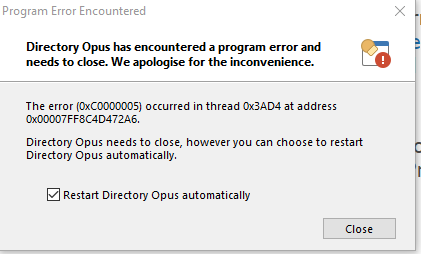 Do you get the same crash if you turn off Content Types again, then go into the folder and switch to Thumbnails mode, or turn on any extra columns you had set up for the Content Type that was being triggered?

Based on the thread not being named, it's probably a third party shell extension which is crashing, not Opus itself, which usually happens due to asking them to generate a thumbnail or information for a column.

If there are crash logs, please send them to us and we can see what they indicate:

In the event of a crash, Directory Opus will usually automatically create a log file (also known as a "dump file") in the temporary folder which contains information that may be useful in diagnosing the cause of the problem. (For problems which don'…

When I disabled the content type detection, went into the folder which contained some pictures and changed the mode to Thumbnails using the Toolbar icons, the crash did not happen.

So, it appears that it was some third party shell extension like you have mentioned. Is there any way to find what could be it ?

Is there any way to find what could be it ?

Send us the crash logs and we can investigate.

Many thanks for sending that in.

After analyzing it, it is a bug on our side of things, and we have a fix on the way for the next update.