So I like having certain folders have the property of being sorted by name and another sorted by modified date. But of course, this has a shared system and it gets a little tedious to keep swapping every time I switch folders. Is there an option to fix this small problem of mine?

If you select Folder > Folder Options near the top-center/right of the window, it will show you the current setup for the folder tab you are in. From there you can click Save and then save the format as either the default for all folders, or the format to be used for the folder you are currently in.

If you open Settings > Preferences / Folders / Folder Formats, that will also show you a list of all folder formats saved for different folders or types of folders, where you can also edit or delete them as needed.

I tried the information you've given me, but it seems to have no effect. They still keep following the previous format I changed to.

What happens if you close the window, then open a new one and go to that folder?

Hovering over the format lock on the status bar will also display some information about where the current format comes from:

(Folder Formats in the manual has more information, and there's also Folder Formats: Detailed Guide here at the forum with similar)

Ah that worked. Thanks.

Lastly, columns that I don't need keep reappearing even after saving the format. Is there a separate system for that?

Hovering over the format lock should tell you which format(s) the current columns are coming from.

One of them might have the option turned on to inherit columns from other matching formats.

If you want to set the default format and columns which all folders will use as their baseline, follow the steps in Folder Formats: Quick Guide. It's best to do that first, then customize any folders you want to be different afterwards.

According to the padlock, it's automatically following a format "!folder" which isn't found in the format options.

What does it say exactly? Can you post a screenshot?

Is it saying that after closing the window and opening a fresh one?

It changed to another format I'm not familiar with.

Here is the picture.

"openlisters" indicates Preferences / Launching Opus / Startup / Open the Listers that were open when the program was last closed is on, and you exited and re-launched Opus, so it's brought back whatever was there before.

Try using File > New Lister to open a new copy of the Default Lister, then close any other windows except the one which was just opened.

I don't have the option of ignoring the default.

The Folder Format is properly set but it still is giving me the excess information even though it is basing off of that folder format I edited. Even the default shouldn't have the excess columns.

Please try choosing these settings when saving the format via Folder > Folder Options: 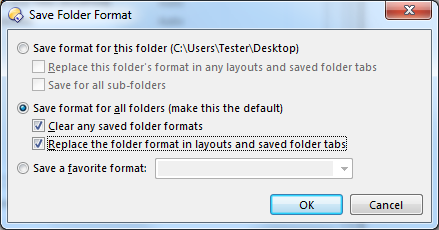 That should erase all other formats and store the current one as the default for everything.

That worked! Thank you very much!

I have another question, the problem of keeping the format in each folder seems to fluctuate after a couple days. Just recently, after finally fixing the columns issue, the folder formats started to not follow the format I saved. Will I have to constantly clear the saved formats every week or so?

You shouldn't have to. If the format seems wrong, try right-clicking the lock icon on the status bar and then Reset to folder's format.

If it's still wrong, something must be overriding the format for the folder; have a look at what's defined in Preferences / Folders / Formats.