Movie thumbs crash after Windows updates (was: DO 11 crashes on scrolling JPGs)

DO 11 has started crashing whenever I scroll down a folder of jpg pics in 'Thumbnail' view. I have re-installed DO three times over the last few days, but it just keeps crashing. 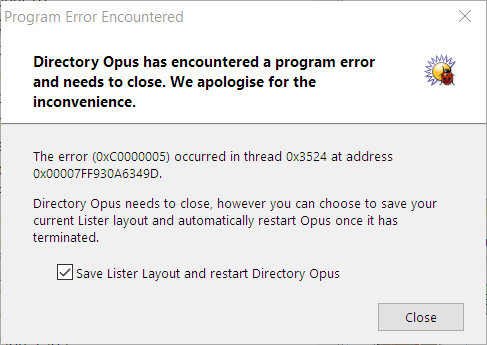 Problem solved. I un-ticked 'Play Movie' and it now scrolls perfectly.
I never wanted that 'Play Movie' anyway as it nearly always caused the mp4 file to be unaccessable for any file moving or re-naming after the video showed. So all in all much better now with this 'feature' disabled.
Thanks all, ' really appreciate your help.

So it was the viewer pane, not thumbnails?

If playing movies in the viewer causes crashes, it's usually due to a bad splitter/codec DLL that something has installed. (Although a recent Windows 10 update seems to be causing crashes with a lot of video software, including Opus, so it could also be that.)

No it wasn't the viewer. It happened with no viewer selected, just the files showing as thumbnails.

Which Play Movie option did you change? I can't think of one that would affect thumbnails, only the one in the Movie plugin which changes what the viewer does.

Not 'Play Movie but, Viewer Plugins | un-tick 'Movie'.
Might not be supposed to work, but it did.

That is this issue then:

Following up on that, the bug Microsoft have introduced into the AreDvdCodecsEnabled API (which we do not call directly, but the MP4 components in Windows appear to call before doing anything) has been causing crashes in multiple programs, not just O…

Recent Windows updates are crashing a lot of video software.

(Since the thread was originally about JPGs and then about playing movies, I didn't think to mention it until now.)