After making a connection to an FTP server using Secure TLS explicit the directories will not expand in the tree view. I can click on subdirectories in the file pane but then moving back up the error is given again. There are no errors in the FTP log that I can see. The error is attached.

Which version of Windows are you using?

Do you know if this only started happening for you with 10.0.2.0, or is this the first time you've tried to use FTP+TLS?

This on on Windows XP SP3.

This has just started happening yes. I have occasionally seen DO crash while connected to FTP but this is the first time in version 10 that I have gotten this error.

The SSL libraries were updated in Opus 10 for OpenSSL 1.0.0d for security and to ensure Opus provides the latest SSL support. The original Opus 10.0 version of these were compiled as the default OpenSSL libraries which unfortunately uses dynamic linking so the Microsoft VS Assemblies are also required. If you are using an Opus 10 version that less than version 10.0.2, please upgrade to the latest versioin. We upgraded the SSL libraries to be correctly statically linked so as not to require extra MS libraries.

If you are using 10.0.2, then note that OpenSSL changed the linking in the libraries to use the later version of winsock (now WS2_32 - winsock2) used in the compile whereas the older 0.98 versions still used a much earlier wsock32.dll library (essentially from windows 98 as I remember).

Check if ws2_32.dll is installed on your machine and if not upgrade the winsock part of your OS as per Microsoft instructions.

If this does not resolve the issue, note that we have seen a very rare case on 64-bit systems where these new 1.0.0.d libraries do not work and we are unable to really define why this is so. The solution is to downgrade the OpenSSL libraries used in Opus 10 and use the original ones from Opus 9.

You can download the older Opus 9 OpenSSL libraries from here. Unzip and replace the ones in the Opus home folder.

(UPDATE: A more likely fix is on the second page of this thread. Try that before this one.)

This is just 32 bit Win XP but I will see if downgrading the OpenSSL in DO fixes it.

Just realized that that is a x64 download so did not do it after all.

You (Greg) and I worked on an issue between DO and Pure FTP previously, do you think that this could be related? It is the same server that I am trying to connect with. Although there are no errors in the local FTP log nor in the server log so I am at a loss here.

At least I can still connect without TLS.

(UPDATE: A more likely fix is on the second page of this thread. Try that before this one.)

I'll post the 32 bit OLD versions later today. They will be

If this does not solve the issue then talk to us directly via email please.

What's the winsock patch referring to, and does it apply to win7x64? should I use the dopus 9 libraries?

Just a possbility but unlikely to help it seems. Use the Opus 9 SSL libraries.

My Win7 x64 machine at home is also having this problem

The files in the zip did not make any difference on my x64 machine.

Will be trying the x32 files in a while here.

Thanks for the attempt!

I have exactly the same problem with Opus x64 version 10.0.2.0 running on Windows 7. I updated directly through Opus which may be part reason why it has a problem?

I updated directly through Opus which may be part reason why it has a problem?

That shouldn't be a factor, provided you rebooted after installing the update.

I have tried using the old version 9 libraries as suggested in the above post but the problem still persists.

After making a connection to an FTP server using Secure TLS explicit the directories will not expand in the tree view. I can click on subdirectories in the file pane but then moving back up the error is given again. There are no errors in the FTP l…

I am presuming then it may not be an issue with the libraries but with Opus itself?

(Edit: Don't worry about this for now as the info may not be needed. If it turns out we need it again, I'll post another request.)

I plan to post some test/diagnostic programs for you to run in the next few days to try to get to the bottom of this.

In the mean time, it would be really useful if everyone experiencing the issue could post a list detailing:

[/li]
[li]Version of Opus the problem was first seen in.

[/li]
[li]Whether or not SSL worked in older versions. (i.e. Was the problem first seen because it's the first time you ever used SSL, or were you using it before and it stopped working after an update.)

[/li]
[li]Any anti-virus or firewall software you have (ignoring Windows Defender and the Windows Firewall).

[/li]
[li]A list of non-Microsoft tools you have installed which include shell extensions.

This may be important! Jon, Greg and myself have been unable to reproduce the problem on our own machines and on vanilla Windows installs, so the problem may be caused by something that gets loaded into the Opus process (via a shell extension) which, for example, has already loaded a conflicting version of the SSL libraries.

[/li]
[li]You don't have to install it, just unzip the archive and run ShellExView.exe.

[/li]
[li]In ShellExView, Make sure Options -> Mark Non-Microsoft Extensions is enabled. (You should see some of the extensions highlighted with a pink background.)

[/li]
[li]In ShellExView, sort by the Company column. You should get a bunch of pink, non-Microsoft items at the top of the list, and another bunch at the bottom, with the Microsoft ones in the middle. Like this:

For example, if you saw something like this you'd only need to list Directory Opus, TextPad and TortoiseSVN: 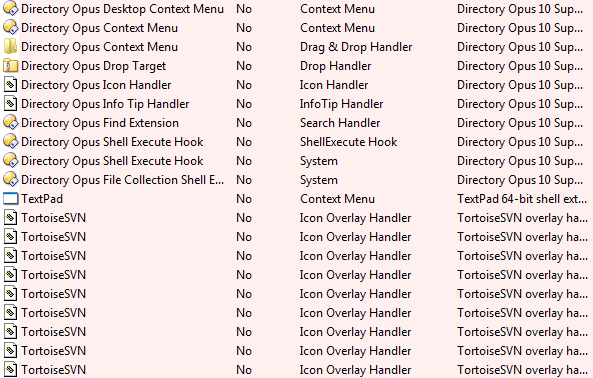 I thought it a bit strange when this problem appeared because I was sure I had already connected using TLS and was able to view files with the viewer pane after upgrading to 10.0.2.0. This evening I managed to get it working again and I have a sort of fix. When you connect and login with your lister it must some how lock the DLL from Opus process using it again? A way around it is to stay connected and let Opus timeout the connection (you will hear that typical Opus lose FTP connection sample sound). Next open your viewer pane and then select a file on the FTP to view. Opus reconnects and then views the file. Select another file and it must drop connection before reconnecting and viewing again. As soon as I refresh the lister so that Opus reconnects and logs back in and I go to view a file it produces the error message.

Many thanks, Mr Hall.

The combination of a TLS site and the viewer pane makes the error message appear for me as well.

We'll look into it further and I'll post an update here when I have some news.