Thumbnails for .mov and .mp4 crashing after Windows updates

Opus has started crashing on me when i'm in thumbnail mode and the folder contains .mov files (from my iPhone mostly).

Also if i'm in details mode and then I move the mouse over a .mov file I get the same crash, presumably when it tries to read the file to generate the tooltip. 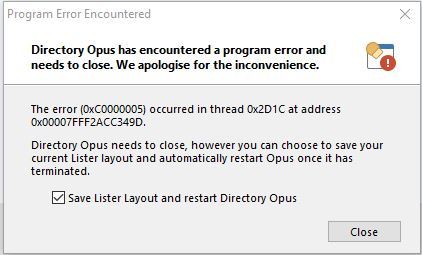 Thanks, i've found the problem. It's the Movie Viewer Plugin crashing opus. If I disable the plugin - no more crashing.

This is strange because i've never had to disable the plugin before and it's been fine.

What will I be losing by no longer using the plugin? The .mov files preview fine and the thumbnails and tooltips are working. 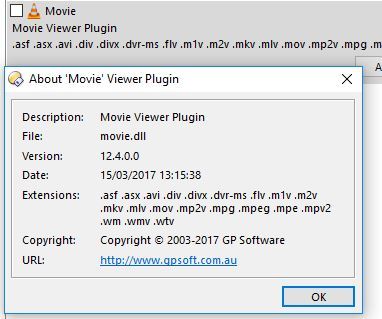 It won't be the Movie plugin itself; it will be one of the codecs/splitters installed on your system that handles MOV files.

(The Movie plugin knows nothing about .MOV files itself. It just acts as a gateway between the viewer and whichever codec/splitter DLLs are installed on your machine and registered against the different video types.)

This guide has some suggestions for fixing codecs/splitters:

HOW TO: Enable/fix playback of various media formats in Opus Opus FAQs

The information below should help you enable playback of various media formats in Opus, as well as in other Windows programs such as Windows Media Player, Windows Media Center, and so on. Formats which should work “out of the box” (MPEG, MP4, MP3,…

Alternatively, disabling the Movie plugin is fine if you find other plugins work better. You'll probably have the files drop through to the ActiveX plugin which would then use Windows Media Player to display the files in the viewer pane. It may be using the same codecs/splitters, but in a way that doesn't upset them. (It also keeps things isolated in a separate process so if they do crash it won't usually take Opus with it. It also uses the 32-bit versions of the codecs/splitters by default, which are sometimes better tested or simply different components to the 64-bit versions that the Movie plugin uses.)

Strange, I came in here to complain about this. I'm also having a crash issue with the movie viewer plugin reading .mov files (specifically, videos taken with an iPhone camera). The crash I'm getting looks just like reck's screenshot. It doesn't seem to have an issue with other types of files. I just had the crash start happening yesterday; previously, it was never a problem. Disabling the "Movie" plugin solves the problem, but then I do not get video metadata in DOpus.

Is there any chance that Tuesday's Windows 10 patch included a breaking codec change? (Since Microsoft is bundling a lot of codecs/splitters with Windows nowadays.) I can't think of anything else that I have changed recently, and the timing between the two of us having the same problem is suspicious.

Aaron, that's a good point about the recent Microsoft patch Tuesday as that's just gone on my machine as well.

I can't be certain when it stopped working for me but it must be recent as I use Opus to manage all my photos and videos from my iPhone and it wasn't that long ago that I copied some media from it.

I've also had to leave the movie plugin disabled until a fix can be found. I've not checked the second link that Leo posted yet so I'm not sure if there's something there that could help?

i wonder if this change also affects movie files that don't originate from iPhones.

Found a slightly better fix, I left the "Movie" plugin enabled and just unchecked the "Generate thumbnails" option in its configuration.

Strangely, thumbnails still show up for my .mov files (generated by the system maybe?), but I get no crashing, so no complaints.

I tried removing ".mov" from the list of supported formats in the "Movie" plugin configuration and leaving "Generate thumbnails" enabled, but it still crashed in that case.

I am also having the same crashing and restarting problem.
However, I have it in folders that DO NOT have .mov files.
The directory I have the problem in has .gif, .wmv, .jpg and .bmp files.

I don't have any iPhone files.

It also started recently. I upgraded to 12 yesterday hoping the problem was fixed.

It was not fixed.

Any recommendations? Did Windows do this with some update? I'm on W10 x64,

Edit: I disabled the movie plugin and the problem stopped. All of the files have icons displayed in the largest size, no issues once I did this.

I'm also on Windows 10 x64 and updated to the latest opus release in the hope it would be fixed.

We'll just have to wait for a response from the Opus devs as to the cause and hopefully a fix. In the meantime the only thing you can do really is what Aaron suggested in the post above yours.

It sounds like this is caused by a recent Windows update, but if those seeing it want to send us some crash dumps to look at we will see if there is anything we can do on our side to avoid triggering the problem.

In the meantime, turning off generate thumbnails in the Movie plugin seems the best workaround. You'll still get thumbnails via Windows, just without the sprocket borders. 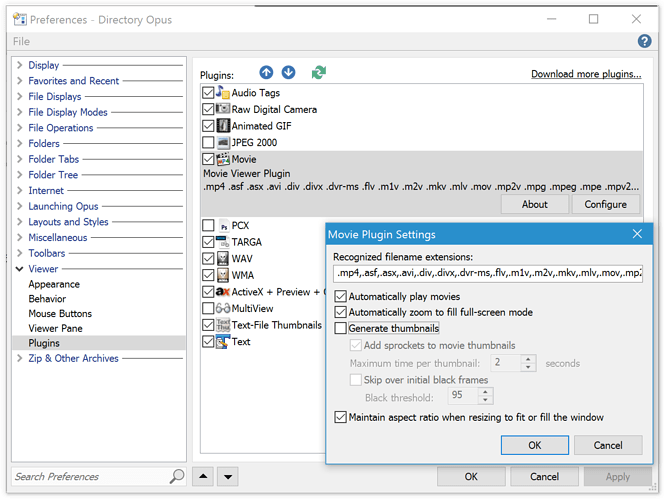 I've just sent you guys a crashdump. Hope it helps.

Thank you for the crash dump.

It confirms the crash is within some Windows code. Unfortunately, it looks largely outside of our control as it's on a thread which Windows is starting, calling code that is part of Windows, with none of our code involved on that thread. My guess is Microsoft have introduced a bug where this code will crash if it is triggered by more than one thread at a time, or if something else isn't done with the same component before the thumbnail code is triggered.

At least for now, we plan to disable the Movie plugin's thumbnails option by default, so the thumbnails are generated via a slightly different route (which apparently does not trigger the Windows bug). These days there isn't a lot of benefit to using the plugin's method anyway, so this isn't a bad solution.

Following up on that, the bug Microsoft have introduced into the AreDvdCodecsEnabled API (which we do not call directly, but the MP4 components in Windows appear to call before doing anything) has been causing crashes in multiple programs, not just Opus:

So this is definitely a Windows OS bug, and you'll probably see a lot of other video software crashing until it is fixed.

Hopefully the workaround we have planned will stop Opus crashing, but it may just make it less common, based on the above.

The good news is that since the Windows bug affects so many things, Microsoft are more likely to fix it.

Good to hear ! i have this crash often in thumbnails mode, since a long time (not just since the last update). on very specific file (even .mp4 with H264 codec), it's very rare but when it's happen it's a pain in the a** :D. i'll try immediatly the workaround, hoping i'll still be able to use the thumbnails feature until microsoft fix this ! thanls

If you've been having it for a while, the Windows updates might add to it but the underlying problem will be a bad video codec or splitter on your machine.

You may find the same workaround (disabling the Movie plugin's Generate Thumbnails option) also works, as it'll cause movie thumbs to be generated via a different route which may not trigger the codec/splitter bug, but it may still happen, depending on the nature of it.

I just tested it and the 2 files that i'm sure was crashing opus by disabling the tumbs from the plugin are not crashing anymore !

i'll Watch the other topic "how to. enable...." in case it's happen again ! Thanks

Are we still talking about thumbnails, or movie playback in the viewer pane?

Sorry, posted too fast.
Yes, my crashes are related to the playback in the viewer pane.

Yes, my crashes are related to the playback in the viewer pane.

Probably unrelated to the Windows 10 thing.