You've been able to add shortcuts to your own folders to the standard File Open/Save dialogs for many years in Windows, FWIW.

Quick Access is much better now because it's better integrated with Windows 10 shell than it was in previous versions of Windows. It's much easier to add folders to it, than it was before. You just right click on folder and click to "Pin to Quick Access". You can do it even from Dopus. That, plus the ability to use it from windows dialogs makes a pretty great combo.

Dopus Favorites have hierarchy and can be much better organized than Quick Access. But this wouldn't be the replacement of Dopus favs. Just another Desktop tree folder, like your File Collections.

Just my opinion, but I think implementing the Win 10 Quick Access functionality in DO would be beneficial. The ability to right-click a folder and say "Pin to Quick Access" is extremely useful and convenient. For example, it is very easy to temporarily add a folder that I'm using frequently but only for a week or so, and then remove it when I'm done with that project.

I realize that I have greater functionality using DO favorites. But there are applications which explicitly open Windows explorer, regardless of whether DO is configured as my default explorer. If I have created DO favorites, those will (obviously) not exist in the Windows explorer window, meaning that I have to maintain two lists of "favorites".

DO has had this functionality for years, DO implemented it first, and we have been using it (and been thankful for it) for all of those years. But now that MS has decided to implement their own version of them, why not include that in DO as well (assuming it's reasonable from a coding standpoint)? It will only make DO even more useful and valuable.

We're not sure if there is an API for this, and experience has shown that, even if there is, supporting new shell features like this is a waste of time because Microsoft remove them on a whim in the next version of Windows or the one after it. (This feature itself is only really doing what Explorer did in several other ways over the years before.)

The Quick Access bar is not suited to holding more than a handful of folders at once, so it does not seem like much effort to add the folders to Opus and Quick Access if that's what you want. (I have done just this myself, with toolbar buttons in Opus to access some of the same folders I've put in Quick Access. This also means I don't have to use the folder tree to get at the list.)

We may have another look at it and re-consider in the future, but there's much more urgent work to be done at the moment.

Try tools like Listary or Direct Folders if you want a list of unified shortcuts which work in Explorer, Opus and the standard file dialogs, and which do so in all versions of Windows and are more likely to continue to work in future versions of Windows after Microsoft change things yet again.

[Note 19/Aug: I removed a reply which just said another product is better without any information as to how or why. Feel free to ask for features, but just saying something is better with no detail will be considered spam.]

There are plenty of alternatives you can use in Opus, some mentioned above.

Wow! I'm afraid to add my 2 cents, but as a long-time Directory Opus user and fan, I would also like to see the Quick Access folders made displayable in Dopus. It appears I can right-click and with the existing Explorer integration add a folder to Quick Access within Dopus, but there's no way to turn on display of Quick Access in Dopus. There is absolutely no way I would leave Dopus to go back to Explorer, but that doesn't mean as a paying customer I shouldn't be able to suggest enhancements and be treated respectfully in response. When I protested the Vietnam war in the 1960s I was told to go to Russia if I didn't like EVERYTHING about the U.S., surely it's not that way with Directory Opus?

I think that's a slight overreaction

If you make a toolbar button or hotkey which runs this, it will take you to Quick Access in Opus: 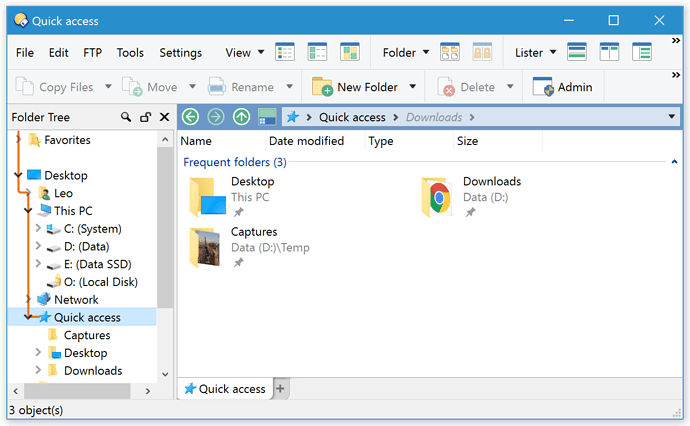 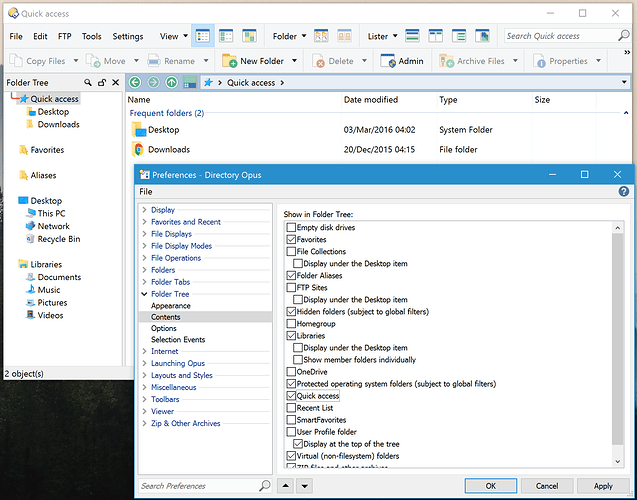 That is great news. Thanks!

That is great news. Thanks!

I use this button Go /quickaccess FOLDERCONTENT in a toolbar but it does not show folders like my documents, downloads, iCloud etc.
I can see iCloud photo's folder in quickaccess in opus but it gives an error when i click on it (an error occured when reading folder).

We think we've found the cause of the missing folders. Please try it again once 12.0.12 beta is released.

when i click into the field, it says the full path of the folder:

but i can't click a layer up or go up to the real path structure, i can only go up to quick access.

when i close dopus and reopen it, i see the full path like it was in all other folders with clickable path layers:

how can i get the default behaviour to full path at the first place without restarting dopus?
looks like a bug for me or is there a setting for this?

and its only when i cklick the items from the folder tree
when i click on the "quick access" in the folder tree itself and than double click an item in my folder view, the path is correctly fullpath and clickable.

Recent list is automatic list which shows you recently accessed folders.
QuickAccess is like Favorites, but built in Windows Explorer and newer standard Windows dialogs, where you can pin or unpin folders as you like.

Just came here and saw you support the quick access feature. Looking now so long for a software which does that and finally I found one. Tried FreeCommander, XYPlorer and so on. I suggest you activate it as default and deactivate your own favorites bar, because the feature is really hidden and it helps so much. Especially in windows file selection dialogs like others mentioned before. I will buy it. Thanks and great work.