[ul][li]Directory Opus 10 users: This thread only applies to earlier versions of Opus.

In version 10, you can configure context menus for various archive types via Preferences -> Zip & Other Archives.

Is it possible to add the same kind of extract functionality for RAR files that zip files have? Meaning if I drag a rar file with the right button it says extract here, right click shows a menu with extract options and so on.

Yes I know, but only zips have the menu options. You have to open RARs before you can extract the contents.

Meaning if I drag a rar file with the right button it says extract here, right click shows a menu with extract options and so on.

Go to Settings -> Filetypes and edit your RAR filetype, then add menu items like these: 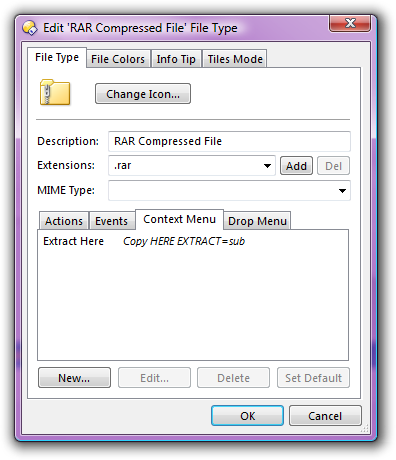 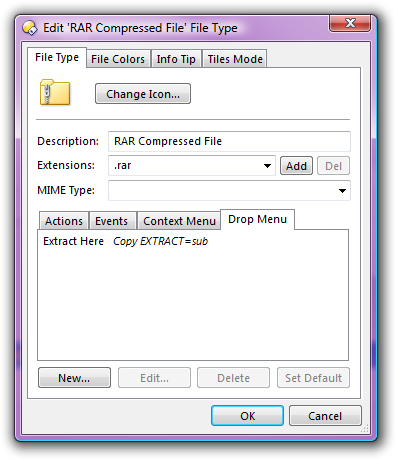 Thanks for those! How would I add a "Extract to .." option to the context menu? Or a "Extract to " option, so that the folder name is shown just like with zip files?

How would I add a "Extract to .." option to the context menu?

Or a "Extract to " option, so that the folder name is shown just like with zip files?

In terms of behaviour, the =sub part in the other commands will mean the archives are already extracted to folders with their names.

In terms of having the folder name in the actual item label, I didn't think you could do this but it turns out you can. Set the label to this: 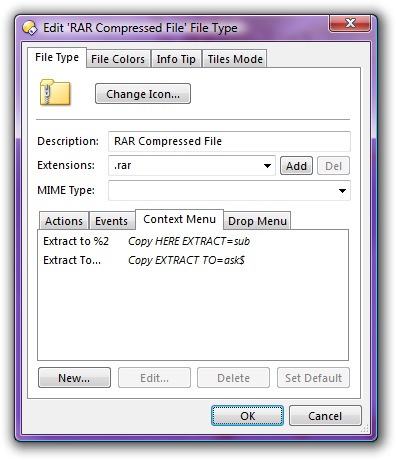 Great! Thanks again. It would be nice to get these as standard in DOpus...

Regarding the explanation in HOW TO: Make RAR files open in Opus on double-click

If i change DDE message to [NewTab("%L", %I)]
it opens a new tab in the existing Lister.

Is there any command to reuse the same tab?

To reuse the existing window:

Instead of using a DDE message make it a normal command (which will work in Opus and Explorer) and set the command to this:

(Change the path if you installed Opus somewhere else.)

I created a new filetype group for .rar files and added all these to "Context Menu" and it works as I need it to.

But now the new rar functionality appears in both Windows' and Opus' context menu, and I'd like it to appear only in Opus' menu (the one that gets activated in the options -> preferences -> miscellaneous -> windows integration -> hide Windows objects in context menues (shift overrides)). So how can I add these menus to the "Opus clean" context menu only?

Context Menu items which run Opus commands directly (not via dopusrt.exe) shouldn't show-up outside of Opus (since they won't work there).

When you added the items, what Type did you set them to? They should have been "Run an Opus function (not supported in Explorer)". Note that you cannot change an item's type after creating it; you have to delete it and create a new item. 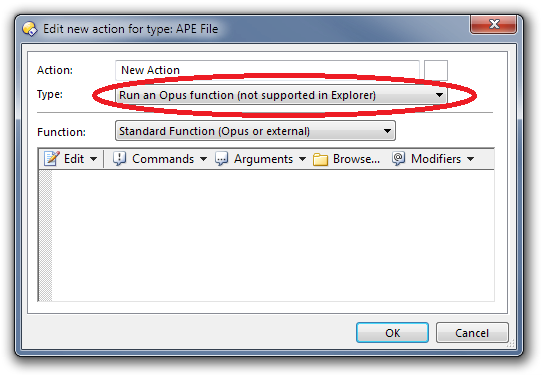 They new menu entry does not show outside of Opus if I rightclick on a rar file.

In any case, I deleted the Filetype Group I created in the previous step and tried with the System file Type. I did it like this: 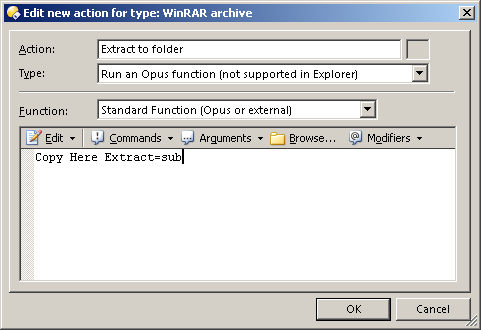 I'd like it to be a bit different though: 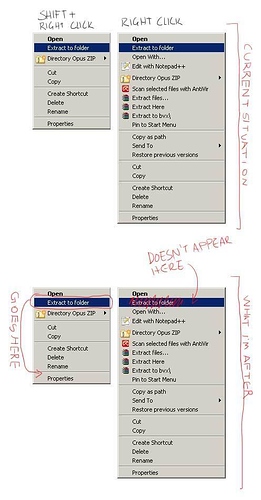 (on the left is the "Opus clean" menu vs standard context menu I get when I rightclick on the file while holding Shift (the context menu in Explorer looks different but it doesn't matter as I never use it).

Is there a way to make both context menus from the upper part look like their equivalents in the lower part?

There's no way to do that. If you have hidden non-Opus items by default, shift-right-clicking reveals the hidden items in addition to the already visible items. There is no way to make it reverse which items are hidden/shown; holding shift shows everything.

You can, however, have a sub-menu which contains just the hidden items. Add an item with this command:

Oh I thought I can do that (I just noticed I marked the context menus wrongly in the pictures from the previous mail).

Hm, then, is it be possible to show the part of the Windows menu that deals with rar files (in particular lines "Extract here..." and "Extract to 9folder name)" in the "DOpus clean" menu - not in a submenu though, but above of what is currently "Directory Opus ZIP"?

Depends on the items, but usually, yes: Tip: Organise and Speed-Up Context Menus