Opus 12 now has a Preferences page to control what Win-E does on Windows 10: 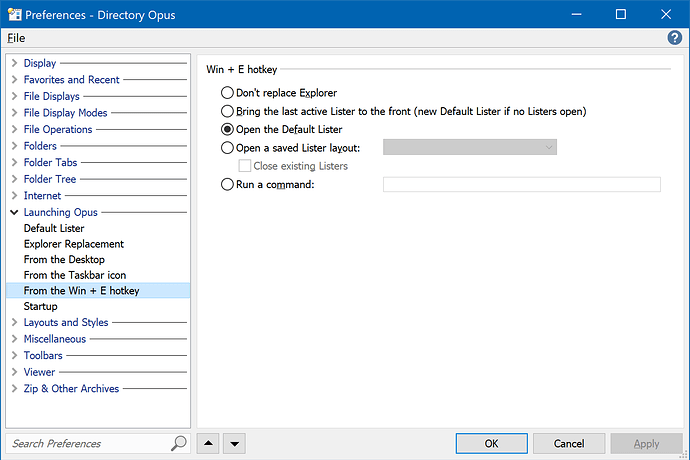 We recommend using that if it is available on your setup. The details below can still be used, but the Preferences page is preferable and should be more reliable than trying to replace the hotkey the other way.

Normally, the Windows + E hotkey will open the This PC (aka Computer) folder, or sometimes the Quick Access folder in Windows 10, rather than your default lister. If Directory Opus is set as the default file manager then the This PC folder will open in Opus.

The Win + E hotkey is defined by Windows itself, whether or not Opus is installed, as meaning "open the This PC (or Quick Access) folder", and that's just what it does.

You can change what it does, if you wish; see below.

Opus creates its own system-wide hotkey which opens your default lister. The hotkey will be either Shift + Win + E or Win + O, depending on your version of Windows and the version of Opus you first installed.

You can see and edit those hotkeys under Settings > Customize Toolbars > Keys.

There isn't an official API for overriding the Win + x combinations that are defined and reserved by Windows itself. Windows may grab those key combinations at a very low level before other programs are able to intercept them. We try to make it work, but Microsoft also keep breaking it with changes to Windows. This is why the default hotkey Opus adds now uses Shift in addition to the Win key.

If you're comfortable with registry editing, you can configure Windows to ignore the Win + E hotkey via the DisabledHotkeys registry setting, which then allows Opus to use it for its own purposes. Remember to reboot after making the registry changes.

To override the Win + E hotkey and make it open your default lister instead of the Computer folder, follow these steps:

1 Like
Setting Win+E to default lister does not work in v12.2
Win+E hotkey issue solution
List of FAQs organised by topic
Open only one instance of Opus, from external hotkey