In the standard File Explorer if I right click on a Folder within my Onedrive hierarchy I get a 'Sharewith/Onedrive' option. Is there any way to get this in DirectoryOpus?

Do you see that if you right-click the same thing within Notepad's File > Open dialog? 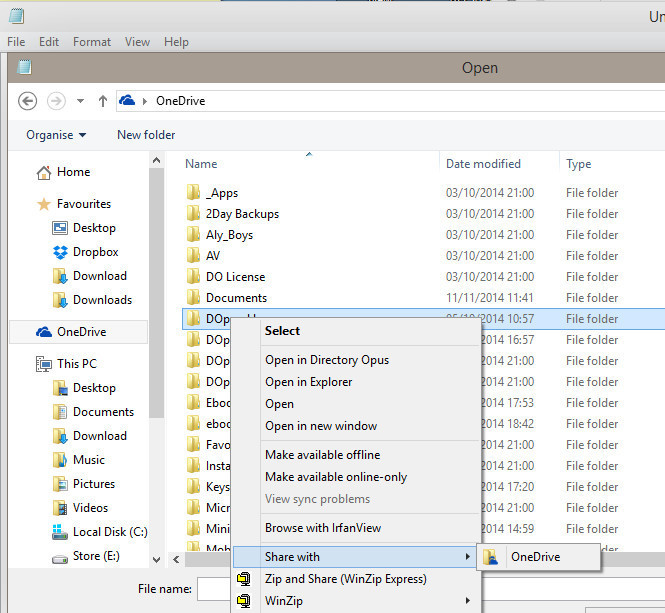 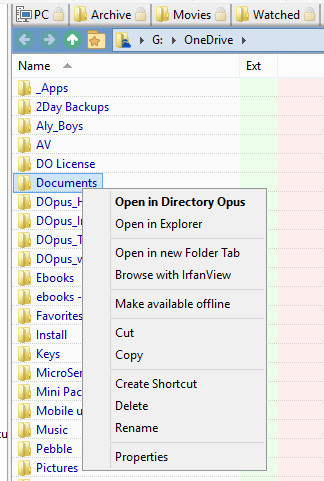 Do you have Preferences / Miscellaneous / Windows Integration / Hide Windows items on file context menus turned on?

Just checked and that is turned off.

Could it be a Windows 10 glitch?

It could be Windows 10, but the missing WinZip items are also interesting.

Are you doing anything unusual, e.g. running the 32-bit Opus via a USB stick on a 64-bit OS?

Nothing strange at all, running the x64 build on the OS from the native SSD boot disk.

Just checked my install on my Surface Pro which is running Windows 8.1 and I've got exactly the same issue there as well. That is Irfanview shows up but no other entry.

The settings on that machine were created from saving on the main PC when I was running Win 8.1 and then imported so it could be something that has been set the main PC and migrated over - if that helps at all?

I have tried toggling 'no_contextmenu_fix' but it makes no difference. These issues only happen within the Onedrive hierarchy on all other folders on the PC the DO and WinZip extensions show up just fine.

Got to be something weird in Windows shell structure as the new Win 10 build with the reworked Onedrive system (not popular) has all the context options working fine.

Microsoft do seem to be changing everything about how OneDrive works in every Windows update, and introducing new, undocumented OS features just for it, so this wouldn't surprise us.

But we are not supporting Windows 10 yet so it will have to wait.

From articles published recently, OneDrive in Windows 10 is still in development and subject to change.

Reporting problems to Microsoft is the right thing to do. You are beta-testing Windows 10 and you have found a compatibility issue in it, so please tell Microsoft. That's the point of the Windows beta, after all.

Agreed.... and the new build of Windows 10 does in fact not suffer from the issue.

However I did say 'Just checked my install on my Surface Pro which is running Windows 8.1 and I've got exactly the same issue there as well.' So it is an issue on current supported OS's, but looks liek it will likely be fixed with Win 10

I'm experiencing this same issue, in the meantime with a production version of Windows 11, specifically Windows 11 Home 21H2 OS build 22000.282, Windows Feature Experience Pack 1000.22000.282.0. Updated to the latest Directory Opus 12.25. For reference, attached are screenshots from the context menu on a local OneDrive folder 1) from Directory Opus, 2) from within Notepad > Open menu. 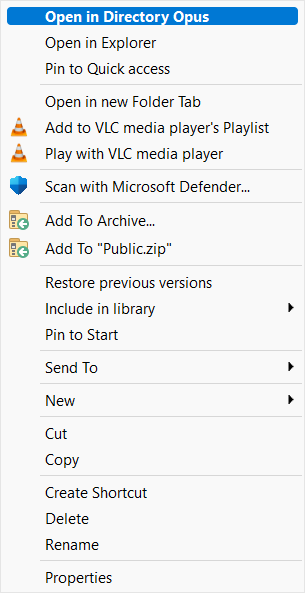 Hello, I have a small issue with DOPUS12 I just install W11 and latest version of DOPUS12 (12.25) and OneDrive share icon was disappeared form context menu. I've read some posts on this forum and unfortunately I cannot solve this problem by my own…

In Windows 11, there is no onedrive option in the right-click menu Help & Support

I downloaded the Directory trial version, but there is no Onedrive menu in the right click 。 However, in the system's own explorer, the Onedrive option in the right-click menu is normal . [image001] [image002 (1)]

The only problem I've noticed with DO and Windows 11 is the OneDrive commands are missing from the context menu. In Windows 10, if you right-click on a OneDrive folder/file, you would see a OneDrive menu that let you do things like "Free up disk spac…

Hello, running DO on W11 since july = no problem so far except only one lol. when right clicking on a file in DO, my onedrive context menu disapeared. can't share a file anymore. i must go in windows explorer (lol) and use their new menu to do it. A…