Plugins: New source code editor based on Scintilla for W7 and x64?

Is there anybody out there who planned to develop such a plugin? I'm asking, because I don't want to do things twice...so please reply if someone is working on this thing!

Last weekend I made a simple test implementation of Scintilla for DirOpus to get an overview of the effort and what is possible. Looks like, x64 and Windows 7 support is easy to realize. But I'm not an expert in Windows programming. Supporting different languages (and styles) and a nice configuration GUI will be more time consuming I think.

I was a real fan of the well known Sourcecodeviewer plugin, though it had some bugs in it. As the source code is not available and I was missing some features, I plan to rebuild it. But as I am currently very busy, don't expect too much. 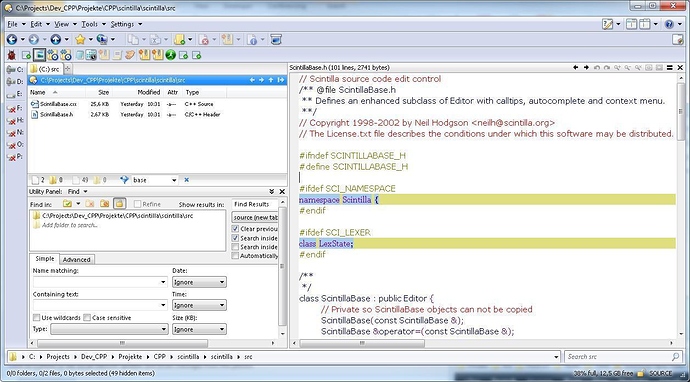 I don't think anyone else is actively writing one. I'd be happy to help with any problems you run into!

Thanks for your help. Indeed I need your help earlier than I had hoped

Thanks for your help and time!

Thanks Leo, you saved my night ! I was getting crazy with my plugin. May I ask you, if you are a virtual person

? Or are you not sleeping? It doesn't matter whether I write a comment in the forum at day or night, I get an answer within a few minutes. And it was really early in the morning at my location (about 3:30am

Thank you very much! Now I can continue!

I am a real person, not virtual.

Some programs will probably put the Scintilla DLLs in System32 so the plugin will probably need to cope with that. You should be able to call LoadLibrary with the full path to the DLLs to ensure the correct versions get loaded.

So it's worth checking out. And once you understand that, it may be worth looking at the other Targa plugin and understanding why it does some stuff differently, which will be easy once you're familiar with the basics.

Just shout if you run into any other problems! 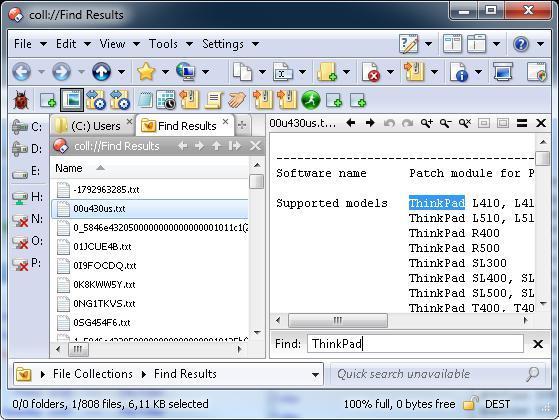 is implemented in the plugin itself, am I right? So I have to create the window elements (the EditCtrl, "Find: " label and X-button etc.) on my own?

The search-field control is pretty low-level and isn't currently documented or part of a public API, but we could change that if needed. It works fairly similarly to a Win32 edit control, taking window messages to tell it which mode to be in (e.g. turn red if the string isn't found) and sending notification window-messages to its parent when keys are pressed or the X button is pushed.

TBH, it's probably easier to use a normal edit control and button, at least to begin with. The code to make them will be very similar to the code to make the search-field control, and the main difference will be cosmetics. It should be easy to swap the edit control for the search-field later if needed. (Or we could provide some functions to e.g. draw the different parts like the gradient background and the close button in a consistent way, if that is easier than using our custom control.)

just wanted to say "Thank you" for developing this plugin. Really looking forward to it.

@Leo: OK, thanks! I think I'll implement it first with a common EditCtrl and perhaps we can later exchange it.

Unfortunately I have the next question for you

:
Scintilla needs a lot of external configuration stuff - at least, if it should deal with a lot of different languages. So, you have to define ALL the i.e. keywords ("if, else, this" for C++) for ALL languages and a lot of defines. My first approach was to compile some default languages in (so the plugin is generating a XML config, which the user can modify) but to provide the user with all possible languages from scratch I don't think this approach is a good idea. I would prefer to read in a XML file, which is generated by me, delivered with the plugin and provides all the necessary Scintilla input config and is not modifiable by the user. Additionally a common Opus config will exist, which is user modifiable of course.

I didn't find a plugin, which uses external (XML) input files. Where is an appropriate folder for this file (Viewers folder as well ?) ? Is this method recommended or do you prefer to generate this config by the Opus plugin (paying attention to be USB safe)?

@xbprm: Hehe, don't thank me before the baby is ready

. Nevertheless I hope there are some more people who are interested in such a plugin!

There's a GetConfigPath function in the Plugin Helper API which plugins should use to get the location for storing their config files. It's usually /dopusdata/ConfigFiles/Plugins, but using the API is best in case it varies.

The full details are in Plugin Support API SDK.pdf under, Configuration Functions section. There is also an API for reading and writing XML config files, but you probably won't want/need that if Scintilla has its own code for doing so.

Thanks, I was aware of GetConfigPath(), but I wasn't sure, if I'm allowed to place some config files there, which are not modified by Opus (as mentioned, they are just READ by my plugin and has to be copied by the user or later by some kind of installer, if any will exist in the near future ).

I will definitely have to use the API for reading XML files, as Scintilla is not able to read in some kind of configuration. It's up to the application, which uses Scintilla.

Very interesting plugin - has there been any progress lately ?!

Please keep going, we need something like this.. o)

Yes, I need this plugin as well and sorry for no progress yet. It is still on my TODO list and must be completed, but I'm still under heavy load. Reading more information about the Scintilla component showed, that the user interface and saved config structure must be more complex, than I thought: The user must be able to change colors, fonts and other settings for different languages and even for different textblocks of that language. Additionally the commands to change these settings are generated and not static. So I have to setup an infrastructure which can handle all these things.

If there is any progress, I'll write news in this thread!

Sorry again for no better news!

Just a little bit of cheering for you.. o) Do you know, does it feature a find?

Did you recompile/enhance it or something? Never seen a config-dialog for this iirc.

If it's ready for general use, please post it to the Viewer & VFS Plugins area.

Would it be possible to make it not require copying SciLexer.dll to system32? Is there a reason it can't be loaded from the same directory as the plugin DLL? (If it's loaded via LoadLibrary, you can give the full path to the DLL; it doesn't have to be in the system path.) That will make it possible for it to work with portable installs, and also avoid clashes with other things that want a different version of SciLexer.dll in System32. (And System32 should only contain parts of Windows itself really.)

Compiling for a static C++ runtime is also nicer for people using portable copies of Opus, since they cannot depend on the CRT being installed.

Supporting portable/USB copies also needs one more thing, which is a USB-safe manifest in the resources, which tells Opus the plugin is safe. (This should only be set if the plugin doesn't modify the registry or anything else outside of the Opus config folder to store its configuration etc.)

Please shout if you need any information or help!

Got it working.. somewhat. I agree with Leo, that looks really promising! o)

I have some issues:

Big thanks for doing this! o)