However, there is a problem that I can't solve and that completely breaks my workflow.
The status icons for cloud files (Synology Drive) do not appear. I've added the folder paths to "cloud_sync_paths" in advanced options, but it didn't change anything. The column "availability" is working as expected.

This is in Opus: 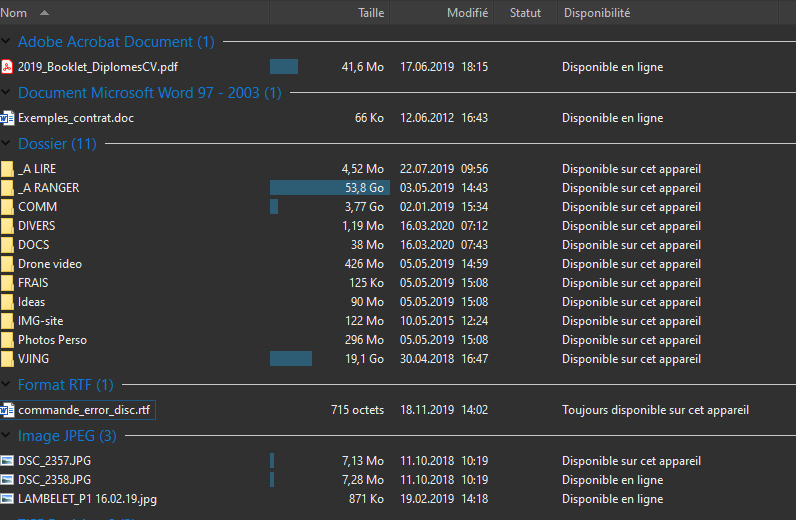 This is in Explorer: 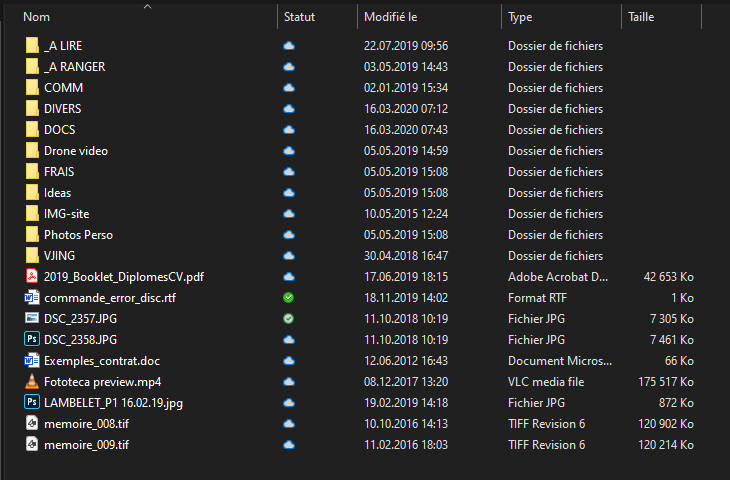 It should work, based on this thread:

It's still working (just checked), giving the configuration is properly set up.

Thank you for your answers!

I had seen the thread in question. But I still can't configure Opus correctly to display the icons.

What I've done for now:, add the paths to cloud_sync_paths:

I also activated the display of status icons:

I'm wondering if this as something to do with the labels??? 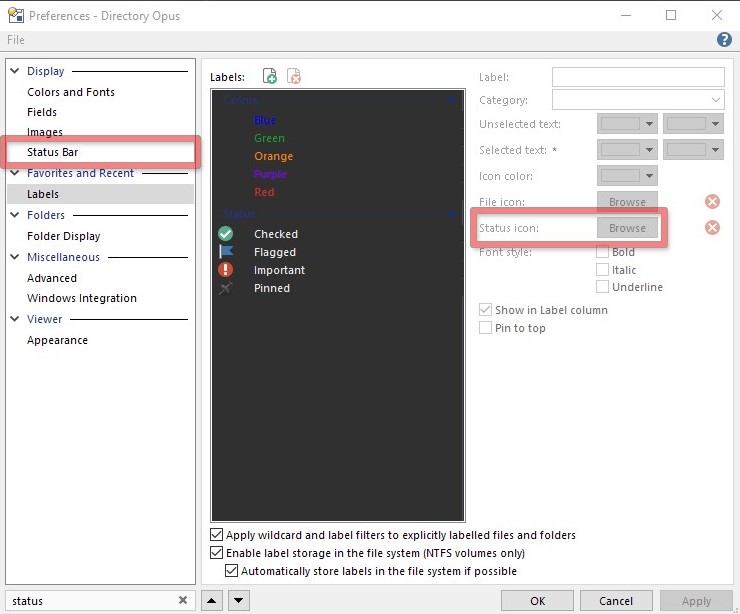 I'd be very happy to have your help in resolving this!

If you pick a random file in one of those folders, and assign a status icon via the Properties drop-down menu (e.g. Checked), does it show the icon in that column?

The others status icons are displayed:

If you pick a random file in one of those folders, and assign a status icon via the Properties drop-down menu (e.g. Checked), does it show the icon in that column?

I am having the same problem as @critical_lab. The Availability column populates correctly but the Status column does not. Explorer shows both. I have my Synology Drive folder defined in cloud_sync_paths and Show cloud storage status icons is checked. If I assign an icon manually to a random file it appears correctly.

I actually just bought a Synology NAS to try to get to the bottom of this and other problems people seem to have with them.

I installed and set up the Sync software, added the path to Opus Prefs, and this is what I see:

Seems ok to me?

This is what I see on my laptop.

I will check with a vanilla Opus configuration on the laptop to see if that makes any difference.

Just checked and it doesn't make any difference. Explorer shows status, Opus doesn't and yes, I remembered to add the Synology Drive path to cloud_sync_paths.

Apart from checking that the path is right and that you definitely have Show cloud storage status icons turned on I can't think really think of anything else to suggest?

Maybe try your desktop's config on your laptop?

Maybe try your desktop's config on your laptop?

I just did and it made no difference. For good measure I also tried the laptop's config on my desktop and the status shows correctly.

It's also not just Synology. I tried looking at OneDrive on both. Status shows on the desktop and not on the laptop.

You're on Windows 10 I assume?

What do you get if you group by the Status column?

Yes, Windows 10. Same version on both PCs which are both on the same home LAN. If I group by Status on the desktop it splits into the correct categories. On the laptop everything is grouped under Unspecified.

The desktop PC has a lot more accumulated "stuff" on it in the way of applications. The laptop is relatively new and I can't see anything suspicious among the shortish list of installed apps.

It would be nice to get to the bottom of this but it's really only a cosmetic thing. To be honest, until recently I had never applied the Status column to any cloud folders on the laptop, which is the machine I use most frequently. I certainly won't be losing any sleep if it remains a mystery.

The latest beta will output a bit of debugging information to DebugView when changing folders (basically it will show what folder it's changing to and the candidate cloud paths it compares it against). Have a look and see if it shows anything.

I ran on both systems. Neither system sees C:\SynologyDrive as a cloud drive but as reported earlier, the desktop shows Status icons whereas the laptop doesn't. Both systems do show (i.e. populate) the Availability column. Relevant?

Ok, thanks. Your laptop's log showed up a problem in Opus where the user-configured cloud paths will be ignored if neither OneDrive or Dropbox are also installed. We'll fix that in the next update.

Does your laptop actually have OneDrive on it? If it does then we're obviously misidentifying it for some reason.

On your desktop, it shows that C:\SynologyDrive does actually get recognised as a cloud path, and you say the Status icons work there, so I'd say that's all working ok.

Apologies, I missed the "Matched" on the desktop log that was staring me in the face.

Ah, that explains it - with Files-on-Demand turned off, OneDrive just acts like a dumb sync tool and everything is always synced. Explorer shouldn't be showing Status icons in that situation either.

Thanks for all your help. This turns out to be related to my earlier question/report about video thumbnails. If Files-on-Demand is turned off I can see video thumbnails otherwise all I see is a generic video icon so it appears to be a case of one or the other. For now, I have switched Files-on-Demand back on and will live with the inconvenience of not being able so see what a cloud based video clip actually is.