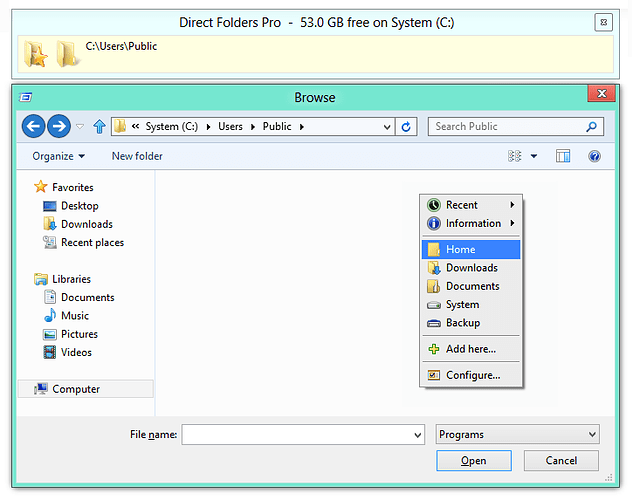 main725×573 34 KB
Can I integrate Direct Folders app into Directory Opus?
Support for 'Direct Folders'
FEATURES REQUEST - {dlgfolder} + open dialog
Explorer replacement for other windows
Can Opus replace the File Open/Save dialogs other programs use?
How can I force applications to use Dopus instead of Windows Explorer?
Tree view of favorites; command line actions
sri September 7, 2009, 12:33pm #2

Answering my own question:

Since DirectFolders displays its menu upon mouse middle click, the menu is shown every time I double click in the empty space of the lister thus bringing all my favorite folders quickly at the mouse position.

Does anyone know if it's possible to jump to new folders launched from Direct Folders's menu (while we are within Directory Opus) in new tabs?

I'm trying to get your solution to work but I'm unsure where to put the lines of code;

I have the double click part working, but can't get the rest to work

ht354: I created a video tutorial for you.

Great work sri, thank you so much.
Can you explain how you set up ctrl left-click to open up the folder from within direct folders, in a new tab, as shown in your excellent video? When I use that key-mouse combination it opens up in a new window.
Many thanks, dba

dba: Ensure that you have the following in your preferences.

Thanks sri for your really quick response. I had checked the entry it but did not realise that it would not take effect until I reopened the Dopus window!

Neat little program, There is always a but though!
Does the program have to be alwys running in the background from system statup?

Yes. I have it auto start with windows. Must-have tool along w/ Directory Opus (of course) if you ask me.

Nice tool but it works best with old windows open/save dialog. In the new dialog (I'm using Windows 7) there's no option to set default view type (I like list view). How can I set this dialog window to always use list view? I'm also interested in disabling content detection in Explorer completely.

Hello, I try direct folders but each time I use it with directory opus, it launches a new window instead of using the same lister. Can I overcome this? (Win7 x64)

Unfortunately Direct Folders is a doesn't work so well with newest DOPUS - when you try to add new book bookmark the correct current path is not read so you have to copy & paste it. Direct Folders seems to be a bit abandoned lately - I've bought Pro version some time ago and my tickets are left (for months) unanswered...

Maybe it's worthwhile to try the freeware program FileBox eXtender as an alternative to Direct Folders:

I've started using Listary and it seems to be a perferct replacement for DirectFolders
listary.com/

I've started using Listary and it seems to be a perferct replacement for DirectFolders
listary.com/

I've been using DirectFolders for a long time, but this seems much better. Thanks.

Same with me. Listary is great.

Anyone knows how to make it work with DOpus 9?

Same with me. Listary is great.

Anyone knows how to make it work with DOpus 9?

I'm using it with DO 10, but if there are some problems with 9th version I suppose you can ask the developer in the discussion section - he was very quick to respond to my problems with DO 10 compatibility

It was because I removed address bar from my toolbars. I added a full-width spacer and very very small address bar to my menu bar so it's in the upper right corner, almost invisible. And now it works alright.

However I can't get "open the file selected in file manager" to work.

However I can't get "open the file selected in file manager" to work.

If you mean the folder opens but the file isn't selected, that will probably* be fixed in Opus 10.0.3.1 (later this week), since we finally worked out how to do it. (*If Direct Folders is doing what I think it's doing.)