This script is inspired by this thread by abr: SetAttr META tags: pasted tags cut off
A german version is available at the H&P Community Forum: Tagger - Dateien und Ordner komfortabel taggen

For Directory Opus 12.2.3 and above I recommend to use the newer version 3.0 which provides a better dialog, much more features and doesn't need autohotkey.exe.

With the new version 2.0 Tagger is no longer a simple script-function button!
It's a Script Add-In now that implements the new command Tagger.
Version 2.1 no longer requires a separate AHK-Script. You can safely delete the file AutoMoveTagger.ahk if you used an older version before.

Create and configure a button or hotkey:

Function:
Activating the button or hotkey opens a dialog box to edit tags. Beginning with the first selected item you can edit the tags of the file or folder. The dialog shows the index of the file/folder, the file name and the existing Tags of the file in alphabetic sort order. The "+" is inserted by default to add tags but you can also remove (-) or replace () tags. Multiple Tags can be applied by separating them with ";" (semi-colon). Clicking Ok (or one of the Tag button options) without changing anything will skip the current file.
The next item is automatically selected in an endless loop until you hit Cancel. This way you can preview and tag each item in a folder comfortably. The text field is limited to insert up to 512 characters.

The Range dialog box will not be moved by AutoHotkey. To make use of the Range option you need to know the index of the items. The index of the actual item is shown in the dialog box. To get the index of the other items you should turn on the column index. Note that you always have to count folders even if TagFolders was set to False.

Usage:
Tagger is especially useful to, for example, apply Tags to every single image in a huge image collection while viewing them in the preview panel. However, you can apply Tags to all file types and optionally to folders.
If you want to use the standalone viewer in fullscreen-mode to tag your files, you should have a look at my new script FullScreenMetaEdit with which you can also edit Ratings and User Descriptions of files but not edit several files at once or apply tags to folders. 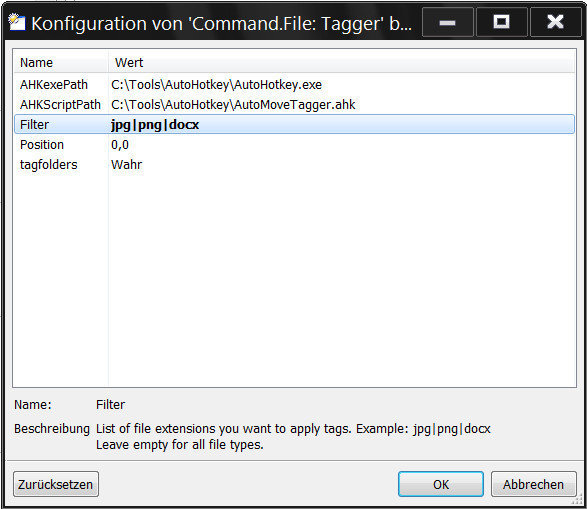 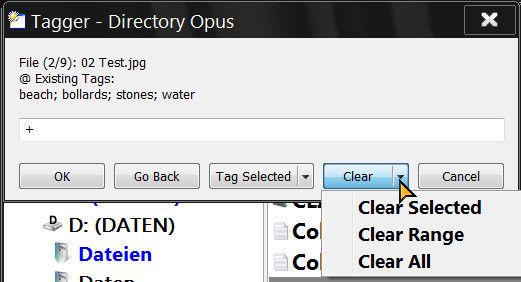 Update12.04.2014:
Added new Options which can be chosen from the Buttons of the dialog:

Update 13.04.2014:
Updated the first post and added the following changes:

Incredible. Thanks a lot. That speeds up my whole tagging workflow quite a lot, one extra keys push for every image to save.

It works great. Only if i want to mass tag images, there could be an extra option "mass tag" or similar, using a small checkbox saying "tag all"
to keep all selected files & apply the tags to them, instead of having to add them one by one.

Thx kundal. But there is one problem: the new function should not tag all images, of course, but only all selected! For example, i have 100 pictures, & 16 images show some trees. So i have those 16 images selected, & want to give them the tag "Bäume". But only for those, not all. Sorry, if i wasn't clear about that. Actually, there are almost never situations to give all pictures the same tag, at least the way i'm using the tags.

Ok, sorry, i just found, you have some more options in the buttons, so i can tag the selected files. Very smart. I misinterpreted the fourth option, when i read it. I think, you could reverse options 2 & 4, because case 4 is more likely. Actually, i think that options 2 even might be redundant, because we can always select all files & run option 4.

Working with this code is a treat. To enhance its abilities, i would suggest a new feature: pushing ESC closes the tagger now. If i have overlooked something in the previous image, i will have
to close the tagger, go back, & re-open it. So here is my feature request: pushing Shift-Esc would reselect the previous image, while staying in tagger mode.

Another idea would be, to have some history function for the input field, like the last used set of keywords (or up to three of them). It happens quite often, that neighboring files have similiar or the same tags, so a history would make sense: I could imagine it using the up & down arrow keys, to open the history, resp. navigate in it.

@abr: Sorry, I couldn't find a way to apply a qualifier to the Cancel button of the dialog. So I had to add a new button for this. The icon was necessary because otherwise the dialog looks ugly with no space between the OK button and the left border of the dialog window.
At the moment I have no idea how a history could be added to the text field. Perhaps someone else knows if that can be done.

Thank you, kundal. I just installed the new version, it works great. To keep a straight workflow using just the keyboard, i have recorded a short macro to push that button per hotkey, so the hotkey combinations for starting the tagger & going back are similar. I use Ctrl-Capslock to start Tagger, & Shift-Capslock to go back. I've set the macro to x100 speed, so it works immediately.

As an native solution, for users intending to use the keyboard, it would perhaps be a good idea, to have some accelerator keys available: "OK" would stay the same, having the default focus, so you would only have to push Enter, then "Go Back", "Clear", "Tag Selected & "Cancel". Pressing l or T would open the menues, of course, revealing the availabe options, also with accelator keys.

The history thing isn't urgent. It's only some old idea, i have requested for Opus a time ago. Maybe someone comes up with an idea, how to add that module or additional lines? I think, it is a good idea in general to have a history for tagging work, as it was when working with DOS commands.

As I said in my previous post I couldn't find a way to apply qualifier keys to the buttons of the dialog. Everything I tried only worked on the toolbar button itself which isn't useful for what you requested. Maybe it's possible and just beyond my scripting capabilities.

No problem, the button is already of tremendous help. Maybe GP likes to add the support for qualkeys one day. It could be quite handy in other scripts, too. The macro i'm using now completely intergrates into the workflow, so it's no difference if it was in the button code itself or a third party thing. Overall, the keyboard support in Opus improved massively, so there are only minor issues left (something like "Select METAPANELFOCUS=keywords" or "Select METAPANELFOCUS=MP3title", complete with being able to assign a keyboard shortcut, to give a certain department in the metapanel the focus).

I have yet another suggestion for the new "tag all" function. Currently, the first file of the tagged files will stay selected. It would make more sense to put the focus/selection after the tagged files.
For example, IMG0001, IMG0002, IMG0003 are selected, getting tagged. After that, the selection should point to IMG0004, as the best approximation of what is to be tagged next.

@abr: What you suggested in your last post is not as trivial as the other changes I made for you. The other things could be done using raw commands like select first, select next, select All and select prev. There's no raw command to select the next file after a selection. My scripting capabilities are still limited and I'm not able to do this at the moment although I'm sure it's possible.

@abr: What you suggested in your last post is not as trivial as the other changes I made for you. The other things could be done using raw commands like select first, select next, select All and select prev. There's no raw command to select the next file after a selection. My scripting capabilities are still limited and I'm not able to do this at the moment although I'm sure it's possible.

Kundal, no problem. It's always possible to set the focus manually, so don't bother. Since i have noe clues about programming or scripting, i never can tell, what is trivial or what is really complicated. So just take this as a suggestion of very minor relevance. Your code works great for its main purpose, & that is what counts. Thanks again. I'm gonna use the Tagger later this evening, because i had a new photo session this afternoon.