Stable vs Beta versions, and the automatic update checker

(Not to be confused with Major vs Minor updates, which is covered separately.)

We may wait a day or two before pushing updates to the update-checker. If you want a particular update ASAP you can download it via the links provided instead of waiting for the automatic notification.

Between stable updates there are usually one or more "beta" updates. The update checker will not automatically notify you about beta updates unless you tell it to: 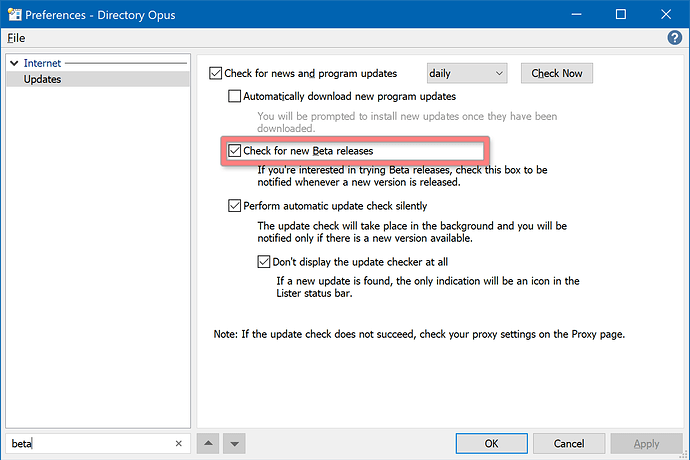 The purpose of beta updates is to allow more enthusiastic users, and those looking for quicker fixes to particular issues, to try out new changes and provide feedback on a shorter schedule. While beta updates are usually high quality and safe to install, they also have not been tested as much. There is always the chance that a beta update will introduce some unexpected problems which will have been found and fixed by the time of the subsequent stable update. (That is pretty much the reason for having beta updates.)

How to know when new updates are released:

Opus won't detect beta updates automatically. There are several ways to keep up with updates and betas (you only need to do one of these, of course):

If you don't configure the update checker to look for beta updates, it won't appear automatically for them, but it will still include them in its list of news. (This list comes from the Opus News Blog.) 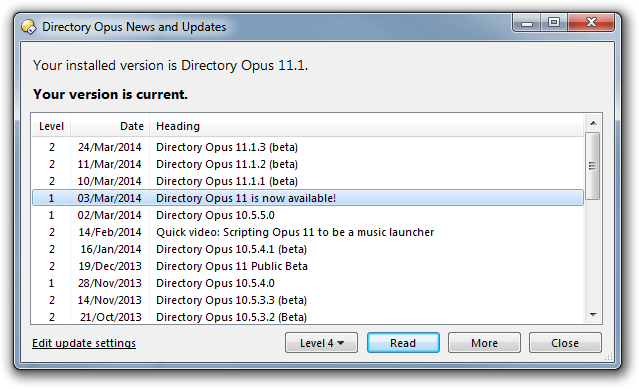 The notification lets users of the old version know when a new major release is available, with links to information about it, but the assumption is that if someone chooses to stick with the old version then they won't be interested in the individual updates for the new one. (Anyone wanting to keep up-to-date with the latest version even though they don't have it installed should use the various links above.)

Note that major releases do not happen often. The most recent were in 2001, 2004, 2007, 2011, 2014 and 2017. There is no yearly, regular-as-clockwork, upgrade cycle with Opus; major releases only happen when enough new features have been written that one is justified. Between each major release there are regular free updates which add significant improvements. The free updates have sometimes been comparable to the yearly "major" updates you have to wait and pay for with some other software.

(For further information, see The update cycle and lifetime licences.)